This section showcase Weapons Malay Dagger Keris. This malay dagger also know as kris or kriss is a very important cultural weapon for the malay.

Weapons Malay Dagger Keris have been produced in many regions of Indonesia and Malaysia for centuries. In Indonesia the kris is commonly associated with Javanese culture.

Keris can be divided into three parts: blade (bilah or wilah), hilt (hulu), and sheath (warangka).

Both act as a weapon and spiritual object, Keris are often considered to have an essence or presence. They are considered to possess magical powers, with some blades possessing good luck. Kris are also used for display.  Legendary kris that possess supernatural power and extraordinary ability were mentioned in traditional folktales, such as those of Empu Gandring, Taming Sari, and Setan Kober. 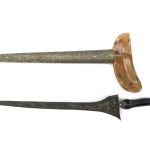 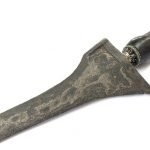