This section presents all the patterns of earweights by the tribes in Asia, mainly Borneo. The Dayaks are former head hunters warriors and the original “wild men of Borneo.” They continued to practice headhunting after it was outlawed by the Dutch in the 19th century. Up until World War II most of them were river-dwelling head hunters. Now many have been Christianized and forced into settlements. They were the original inhabitants of Borneo. However, they are now greatly outnumbered by Malays and Indonesians. It is believed that most Dayaks lived along the coast until they were driven inland after the arrival of the Malays. Here, we are going to explain earweights of the dayak warriors.

Warrior brass earweights, ear plugs are to enlarge and prolong the earlobe of this tribe. These vintage jewellery and body piecing is one of the popular ornaments in south east asia. Therefore, they are most importantly worn during ceremonial performances. As a result, earweights has been a very special and vintage symbol of the tribes in Asia.

Men and women, all used to wear clusters of brass earweights that pulled their ears. They are to make gaping holes in their ear lobes, pulling them down to their shoulders. Some Dayak women used to stretch their earlobes with rings and earweights, put tattoos on their hands and put gold on all their teeth. The practice is still done in some remote areas. Trimmed earlobes is a sign of conversion to Christianity. 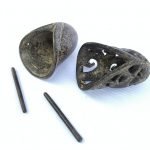 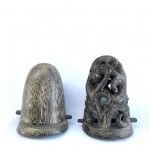