This Bird sculptures resembles one of a very special bird in Borneo, the hornbills. They are very gorgeous and colourful for home decorations. Although in the ancient days they are found in villages and longhouses. This bird sculptures are carefully carved and painted and display in longhouses and villages. Therefore, this is great idea for modern interior decorations.

The hornbill bird sculptures  are both an important bird and cultural symbol for the people of Sarawak especially the Dayak communities. The Rhinoceros hornbill, the best known of all the species, represents the State’s emblem. For the Dayaks, hornbills signify the spirit of God and they must be treated with respect. Thus, If a hornbill is seen flying over or visiting their residences, it is said that good luck and fortune will bestow the community. Therefore, Hornbill elements are also incorporated into their arts, dances, carvings of bird sculptures and ceremonial dresses.

The hornbills are a family of bird which can be found in tropical and subtropical Africa, Asia and Melanesia. Hornbills are distinctive from other birds’ species due to its massive ‘double-storey’ bill. The bill consists of a long, deep beak with a projection known as a casque on top. 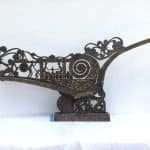 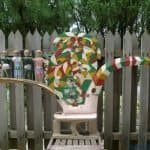